FAPL has had the luxury of some very dedicated employees and volunteers on its roster over the years and 2017 is certainly no exception. Take for instance the case of Derek. The young, determined animal aficionado found his roots helping four-legged souls when he was a child, always bringing stray cats or dogs home. In time, his grandmother informed him of the Friendship Animal Protective League of Lorain County. As it turns out, it was a perfect match of a good soul and an establishment looking for assistance.

Gregg:  When did you begin helping out at FAPL?
Derek:  The second Saturday in February 2016.  I’m just shy of a year here.

Gregg:  How did you get started?
Derek:  The first thing I did here was wash a car (laughs)!  After that I got more involved, specifically working with the animals.

Gregg:  What have been some of the best experiences other than working with the animals?
Derek:  It’s been great making new friends and all the other things that have come with the territory.  When I started, the bigger dogs would pull me around, but my time here has taught me how to work with them so they act calmly.  It’s the same for aggressive cats.  I can handle them now without much worry, whereas that wasn’t the case when I began.

Gregg:  I understand you’re going to college soon.  Are animals in the cards for your future?
Derek:  Definitely!  I’ll be starting classes to pursue a career as a veterinary technician.

Best of luck, Derek!  While he won’t totally be gone from FAPL, the time, care and passion he puts in will be missed. 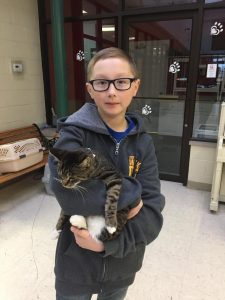 Derek caring for one of the many new cats at FAPL