We hear about it every single summer. Do not leave your dogs in a hot car. Do not leave your children in a hot car. Unless you have been living under a rock, this is pretty well-established advice.  However, as the old adage goes, common sense is not so common. It always amazes me how we homo sapiens are the most advanced species on the planet (the jury’s still out), yet some of us do the dumbest things. I mention this because today, 6/14/17, I witnessed said ignorance firsthand. Let me explain…

I pulled into a local pet supply store today to make a pickup and eventual delivery to Friendship APL.  I turned a corner and calmly parked my car as any other person in a mild-mannered mood would.  Little did I know such a blissful floating-through-the-day was about to come to an end.  The car parked next to me was a silver Chevy Cobalt.  Nothing stood out from the small vehicle that grabbed my attention…until a dog barked.

I spun around, abruptly ceasing my progress to head to the store’s front door and slowly approached the roving oven (a.k.a. the car holding the dog).  Each of the four windows were open as you’ll see in the photo below, but with an opening ranging from approximately 1.5″ to 2.5″, this was not nearly enough to reduce the baking heat inside that car.  Was it better than the windows totally closed?  Of course.  However, let’s not argue for maintaining the situation at hand.

Upon closer inspection, there was not one, but two dogs in the car.  They appeared to be German Shepherds or at least a German Shepherd mix.  The one that barked out to me was in the driver’s seat while the other was on the backseat.  Both were panting heavily and both were obviously in a state of great discomfort.  I checked all four windows and observed the less than respectable openings.  Then the poor pooch up front was struggling to stick his nose through the gap in the window for some air.  I’d seen enough.  It was time to go inside and get answers. 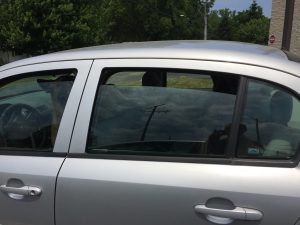 Being a small store and with only one couple inside that was shopping, there wasn’t a whole lot of detective work to conduct.  I approached them and asked if that was their silver Cobalt parked on the side of the building.  They replied with a nonchalant ‘yes’ and stared at me blankly.  Such an expression immediately cemented the lack of coherence I was dealing with here.  The old “It can never happen to me, it only happens to people in the news” mentality was hard at work with these folks.  I explained that both of their dogs were heavily panting in the car to which the woman played it off saying the following mind-blowing statement, “Oh they’re in air conditioning all day.  They’ll be fine.”

I’m not a scientist, but I am familiar with many of its basic workings.  Take temperature for instance.  If you have a frozen bag of peas and you put it in the oven at 150 degrees, that mystical science sorcery stuff starts occurring and things will change.  Magic!  The integrity of the bag will eventually begin to deteriorate and the peas will no longer be frozen.  So despite this widely grasped knowledge, this woman was essentially saying to me that peas will remain frozen in the oven because they were in the freezer all day. I suppose some people still think that if you sail far enough, you’ll fall off the edge of the earth too, but I digress.

During this conversation between she and I, the husband continued to stare at me with a somewhat confrontational glare.  Hey, this isn’t Roadhouse with Patrick Swayze and no one was going cowboy in this scenario.  Still, calling the police was definitely on my radar which was the next step. The woman must have seen that I was not budging on the urgency of the dogs’ situation so she quickly passed the car keys to her husband who proceeded to the store’s exit while mumbling something to me under his breath.  Oh yes kind sir, mumble away.  Mumble to your heart’s content and curse me until the cows come home.  I could care less.  Just make sure you get yourself to that car ASAP and get the AC on and get those windows open before an officer needs to show up, because 327-2191 is engrained into this brain and the North Ridgeville Police are only a thumb click away. 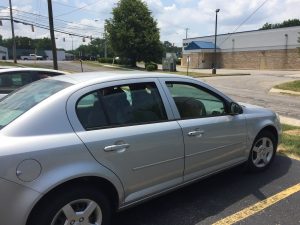 Don’t be the person that does this.

So for anyone who, after reading this Pulitzer worthy article, still does not think anything is wrong with doing what those people did, I invite you to a challenge.  Park your car out in the sun on an 83-degree day like today.  Open each window two inches or less.  Then sit there with the car off.  Tell me how you feel after three minutes, after five minutes.  Let’s not forget that dogs, especially German Shepherds, have a permanent fur coat.  Put a jacket on and sit in that heat.  The moral of the story is don’t be an inconsiderate buffoon who should be sent off to jail for behavior like this while the dogs have to suffer.  Either open all those windows halfway (minimum!) or don’t even bring the animals with you in the first place.  Use. Your. Head.