Elsie came to us with her tail tucked between her legs and her head hanging low. She had just spent 10 weeks in a loud, crowded, city kennel in Cleveland with no luck finding a new home. Elsie then made her way to Friendship APL, for a second chance at finding a fur-ever home. 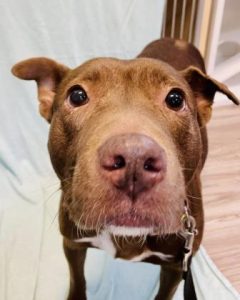 Elsie getting her photo taken for our website. She always had the saddest eyes.

Staff and volunteers at Friendship APL looked at Elsie and thought she mirrored Eor, from Winnie the Pooh. While she had always been friendly and sweet, you couldn’t help but notice her shy, gentle demeanor. Many of us wondered if there was a bubblier personality waiting to show itself.

On January 25th, Elsie met with a couple who hoped she would be theirs. Only one thing stood between Elsie and a car ride to her new home….a four-legged sibling. The couple already had a female dog of their own and FAPL needed to make sure the two dogs got along. After a few minutes of shy sniffs, pure playfulness broke out between the two dogs. Little vocal play gruffs, play bows, tail wags you name it! It was love at first sight for the now sister dogs. Needless to say Elsie busted out of our shelter doors ready to start her new life! 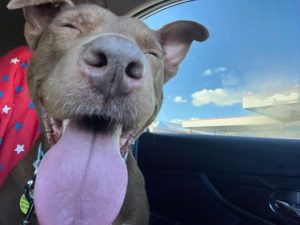 Elsie in the car ride home, after being adopted from FAPL. 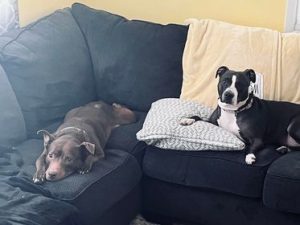 After a few days, a Facebook message sent to us by Elsie’s adopters confirmed she was meant to stay. Elsie is adjusting beautifully to her new home. She enjoys naps on the couch, car rides with the windows down, and of course zoomies with her new dog friend. Elsie is just one example of a home bringing out the best of a shutdown shelter dog.

Elsie, now known as Ruby, is described by her adopter below:

“Ruby has been doing very well at home and has become best friends with our dog Zola! She is a completely different dog than when we first met her. If she is not sleeping with her humans she is running and playing with Zola. She was super shy when we first saw her and we are so glad that we are able to provide her with the love and comfort that has allowed her to open up.”