Accomplishments can be had in many ways at Friendship APL.  The amount of kennels or cat condos one has cleaned can be just as impressive as how many cats or dogs you took to the vet for care or how much money someone has donated.  It’s all symbiotic and they’re all necessary for the continued function of a place like FAPL.  There is one volunteer, however, whose accomplishments start to make your jaw drop.  Ladies and gents, please meet Doc Rick. 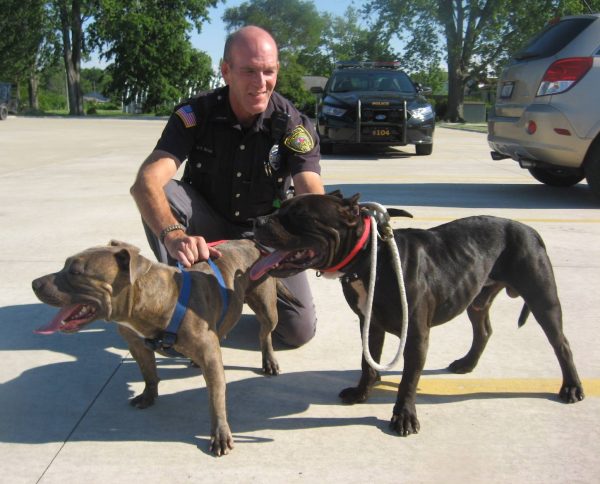 Gregg: What got you interested in participating at FAPL?

Doc: It started when I saw an ASPCA commercial. I was working three days a week at the time and had a lot of time off, so I thought I’d just go volunteer to walk dogs a couple times a week. That changed the first day I went to help with morning kennel care. I had so much fun working with the staff and the dogs that I came more and more often and stayed longer and longer. Soon I started to understand dog demeanor and how to approach dogs that were afraid or defensively aggressive. Soon Greg asked me to spend more time working with these “at risk” dogs. I didn’t realize at the time I was getting “on the job” training for my current assignment on the police department.

Gregg: How did you get the nickname ‘Doc’?

Doc: I was a Hospital Corpsman stationed with the Marines. Marines call their corpsman “Doc” as a term of respect and comradary. The nickname stuck around when I was the medic on the police SWAT Team, then when I was the medic for an off road park. When I started working with dogs, it was already my Facebook profile name so it just continued on from there.

*
Gregg: Outside of FAPL, I understand your full-time occupation is a Lorain police officer.  How long have you been on the force?

Doc: I have been a police officer for 27 years. The first 24 I worked as a road patrol officer. The last three years, my primary assignment is anything involving animals, from safely catching loose or stray dogs, to investigating dog bites, animal abuse and wild animal issues.
*

Gregg: About how many dogs per week would you say you rescue while on the job?

Doc: It varies by the time of year, but I’ve caught about 2,000 dogs in the past three years. About half go to the county dog kennel, the rest are returned to their owners as they are wearing county license or are microchiped. Pregnant females or dogs with significant medical issues, such as starvation, usually go to FAPL. The number of loose dogs has been declining and the number of dogs being returned directly to their owners has been steadily increasing as owners are becoming more educated in their responsiblities as pet owners.

Working in conjunction with FAPL’s Humane Officers, at least 200 dogs and puppies, and a few cats and rabbits, have been seized from abusive, neglectful or deceased owners and taken to FAPL.

Dogs are often the unintended victims of human criminal activity too. Dogs are often present at crime scenes, such as homicides, narcotic raids, automobile crashes and medical emergencies. These dogs are often emotionally traumatized by the incident and are at high risk for defensively aggressive behavior. I’m  called in to  safely remove the dogs from the scene so the investigators and medical personnel can do their jobs.

*
Gregg: The Lorain Police Department will lose a significant member of their team when the day comes for you to retire.  Do you still plan on keeping an eye out and helping stray dogs in the city limits?

Doc: That day is coming in less than a year. There is nothing official yet, but plans are in the works which will allow me to continue to “serve and protect” Lorain’s four legged citizens next year, with a different badge on my shirt.

Gregg: That is awesome news!  Thank you for serving the citizens of Lorain and the canines of Lorain County!