Just under two weeks ago, FAPL brought up five dogs from the Richland County Dog Shelter. One of the most personable of the group, Hank, has received his fair share of attention since that van ride up 71.  The second time Hank was mentioned was for an event in Avon recently at Landmark Garden & Supply.  He had a number of admirers, but October 15th just wasn’t Hank’s day to find a home.  Enter this writer’s third coverage of the delightful retriever mix.

October 22nd saw two pit bull-mix pups, two kittens, two adult cats and our beloved Hank pay a visit to Petitti Garden Center in Avon.  After about an hour into our promotional event on the chilly Saturday afternoon, one excited and determined woman arrived seeking the whereabouts of Hank.  The beautiful dog peeked around the legs of a few volunteers and soon found his human match.  The pair were happy as can be, and with that, we bid farewell to Hank as he settles into his forever home.  We’ll miss you buddy, but we know this transition will be a great one. 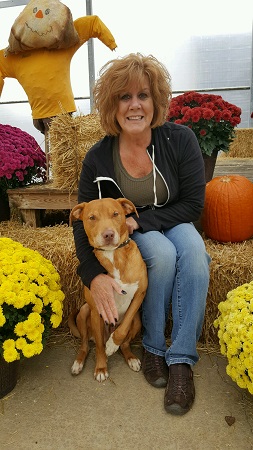 However, the good news doesn’t end there. Remember those pit bull pups I mentioned?  Of the brother/sister pair, the sister, approximately 8 weeks old, was the target of one family’s affection as they were immediately drawn to the wee lass once they approached the FAPL tent.  After several smiles and a lot of time shared with the pup, she was also on her way home as well, meet and greet pending of course.  Believe it or not, like any game show announcer would exclaim, “There’s more!”  The two kittens got adopted together so ‘inseparable’ will still be part of their vocabulary. 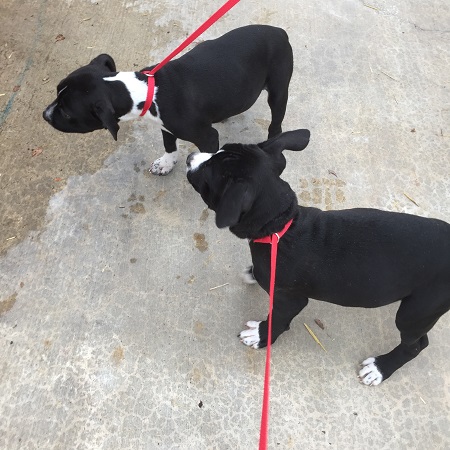 Pit bull pups…how can you deny these little pooches?!

While the remaining pup and two adult cats didn’t get to their homes today, surely their moment is just on the horizon. To see these fine furry friends and many others, please stop by the shelter to see who could be a great match for you.