There’s no rhyme or reason, no metrics, no measurable explanation as to the number of cats and dogs residing inside the FAPL walls at any given time. Sometimes we get an influx of dogs and people are mostly adopting cats that week. Seven days later the exact opposite happens. While it is difficult for someone like myself to remember every animal that comes through, every once in a while there is that one special pet-to-be that just strikes a cord with me.

This past Monday, after doing a little writing for an upcoming newsletter, I walked around the cat cages to see who our current residents were.  As fate would have it, it was the last room I checked when I laid my eyes upon a beautiful black cat named Giulio.  As I stopped in front of his cage, he extended a paw through the bars as if to greet me, a gentle inquiry asking if I would provide him with a few seconds of company.  I read the description on the door of his cage which stated he was a 14-year old male.  In addition, I also learned that Giulio was there due to the passing of his human caretaker.  My heart melted.

After opening the door, he peeked his head outside the frame of his stainless steel home, which promptly led me to gently scratch his head as his eyes began to half-shut in relaxed demeanor.  After kneeling down to his level, it became rapidly apparent the difficulty of Giulio’s predicament.  Kittens are easily adoptable.  Middle-aged cats are more difficult but they commonly find homes.  A cat that’s 14 years old is quite the task to get adopted.  For what it’s worth, this article would have never materialized if I had the space to take him on.  I would have adopted him on the spot.

Nevertheless, these are the cards Giulio and I have been dealt.  I’m not in a position to adopt him and he needs a loving home.  Two days later I stopped back at Friendship to take him out of his cage and let him roam one of the empty rooms.  He sniffed, inspected, observed and walked the perimeter of the room in traditional cat curiosity.  When he was done, he looked at me and meowed a few times, as if to communicate something my human brain just wasn’t able to grasp.  Giulio is a sweet soul.  He’s an adorable buddy that just needs that right person who has no problem taking on a cat that’s 14.

Sometime’s folks look to adopt a pet that is “perfect” in their eyes.  Why?  You don’t strive for a perfect child or a perfect husband or wife.  It’s not realistic and therefore unobtainable.  The same applies for our canine and feline companions.  What’s the big deal with adopting a cat with three legs or dog with one eye or a cat that just happens to be 14?  Take my advice and head over to the shelter and spend a few minutes with Giulio.  He’s confused by the change in his living situation, but his arrival at Friendship is all with the intent for a better life for him.  Pet him, hug him, and you’ll see just why Giulio is a loving and wise cat who could be a great fit for you.   Click here to learn more.

*UPDATE: Within 48 hours of this article posting, Giulio was adopted!  Enjoy your new home, buddy!*Big thanks to Christina M. for making this come together! 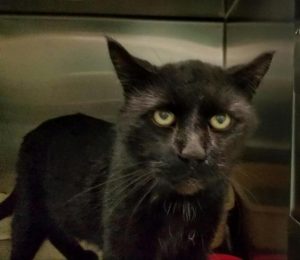