One of the biggest fears as a pet owner is having your pet run (or fly) away. Despite the strongest efforts of some folks to keep their animals corralled and safe indoors, sometimes, a curious cat or dog will take an opportunity to dart toward the great outdoors which aren’t always so great for them. Once exposed to a seemingly infinite number of directions to run and dangers to experience, domesticated animals can be easily confused or startled once they have left the safe confines of their home.

The first step in getting your pet back is to be preemptive.  According to the website HomeAgain.com, 1 in every 3 pets go missing.  That is a startling statistic.  If there is a moral to the story, well actually there are several, but the first that comes to mind is don’t be the person that thinks this will never happen to them.  Make it a top priority to get your cat or dog microchipped the moment you adopt them.  This is not something to dawdle with, but having the microchip implanted in your pet is not enough.

I have come across a few stray animals in the last couple of years that were microchipped, only to never have the chip registered and activated.  Think of it as buying a car without fuel.  It’s completely useless without that final action.  Some facilities may offer one-stop shopping where the chip can be purchased, implanted and activated for a cost roughly around $50.  At Friendship APL, all of our cats and dogs already have microchips when they’re adopted.

If that step has been taken and the animal still manages to escape, the next part of the process is to start calling local shelters (like FAPL) and police departments (their animal control officer specifically) to see if a pet matching the description of yours has been caught.  Many individuals will post photos of their pet along with contact information on telephone poles or in the windows of businesses (with their permission) for bystanders to keep an eye out for.  However, while there is nothing wrong with that, such postings tend to get overlooked (especially when the photo is in black and white) or ruined by the elements.  A more efficient way to track down a lost pet is through local online outlets that specialize in this sort of thing.

The first of which comes to mind isn’t really a website, but a page within Facebook known simply as ‘Sam the Parrot’.  Sam the Parrot was started by the late Jerry Liller, a Lorain County resident whose pet parrot Sam flew away.  Liller created a Facebook page for Sam in hopes of reuniting with his beloved winged friend.  When someone lost their dog and asked Liller if they could post it on his ‘Sam’ page, he obliged.  One thing led to another and today the Facebook page Sam the Parrot is a major hub for lost pets in and around Lorain County. 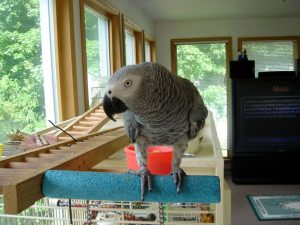 Sadly, Sam was never found, but her legacy lives on in helping hundreds of other pets.

Once outdoors and on the loose, cats and dogs can behave very differently.  Dogs can head off in any number of directions and walk for miles or just camp out in a driveway down the street.  Cats typically don’t go all that far.  They are, however, exceptional at hiding and are most active at dusk and dawn.  Call for them.  They know your voice.  Grab a strong flashlight to catch their reflective eyes in lowlight conditions.  Do not leave food out overnight for your lost cat as that can just attract other animals, like raccoons or opossums, that will chase your cat away.  Don’t keep your lost cat (or dog) a secret.  Talk!  Tell your neighbors and post it online (i.e. Sam the Parrot).  This may sound like a broken record by now in this article, but get your pet microchipped and have a collar and tag on them.  Most importantly, don’t give up!  If you believe someone stole your pet, call the police. It’s a 5th degree felony in the State of Ohio to hurt an animal. 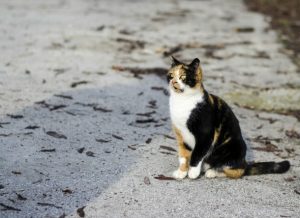 The following are a list of websites for lost pets both nationally and in our area:

Special thanks to FAPL Board President Deb McFadden for her contribution to this article.