With all animals that come through the doors of the Friendship APL, our goal is to find them good homes.  Sometimes the situation at hand just isn’t conducive to that ideal scenario.  Take the case of canines for instance.  Like people, dogs (and cats for that matter) can have a wide range of personalities.  Some are more energetic than others.  Others are more reclusive.  Unfortunately, extremes in that behavioral spectrum do not relate to the most adoptable pet.  A hyper dog can have trouble adhering to commands and the overly shy dog may have minimal interaction with their human counterparts. 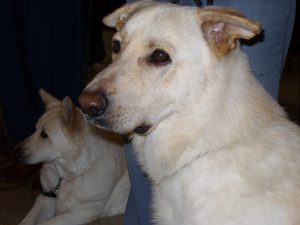 In lieu of scenarios that can prohibit an adoption that is ideal for all parties involved, Friendship APL has utilized an unconventional but extremely productive resource.  If I told you this resource was the GCI, most would pass off the three-letter abbreviation as the condensed name of some company that works with dogs.  That’s not entirely accurate, but not wholly incorrect either.  No it’s not a company, but yes they do work with dogs.  It’s the Grafton Correctional Institution.  Yes, it’s the “big house” for these animals, though the care and guidance they receive is anything but punishment.

This minimum/medium-security installation saw the implementation of the Love-a-Pup program in 1999.  In short, FAPL sends dogs to the prison where they go through an 8 to 12-week program to become a dog that has either come out of their shell or has calmed down to be an attentive companion.  In reality, it is much more than that.  Sure, that is a grand step for these animals and FAPL as well.  A dog that can be adopted frees up space in the shelter for another dog to get rescued off the streets, from a bad home or even from a kill shelter.  There is the human connection, however, that cannot be ignored. 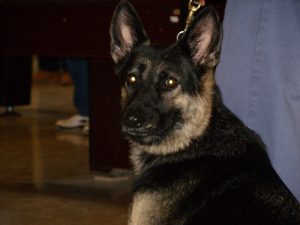 This Shepherd heeds his handler’s commands during a review of the dog’s progress.

Yes, the men that call the walls of GCI home have done some bad things to get there.  The point of this article is not to discuss who is a bad person and who just made bad decisions.  These guys are there for however long, and amidst the 1,999 inmates currently there, close to 20 of them get to have an opportunity to bring a new purpose to their confinement.  What started out as a six-dog program close to two decades ago, has more than tripled in size.  Once an inmate who applies to be a part of the program has been given the green light, they get to choose their dog who is assigned to him 24/7 for the aforementioned 8 to 12 weeks.

On the day I visited the Grafton Correctional Institution, 18 dogs and their inmate handlers came into a room, one by one, supervised by the facility’s Sgt. Roberts and FAPL’s own dog trainer, Don Hutchins.  The inmates and their dogs, ranging in all breeds and sizes, from a spunky Chihuahua-mix to an all-white icy-eyed Husky, stood in place while Don examined each pooch.  They then paraded their canine friends around the room as the dogs proudly walked in an orderly fashion at their handlers’ sides.  This was soon followed by a variety of commands from the inmates such as sit, stay and come.  Some dogs were a little more eager than others to get that treat in their handler’s hand, but that’s why it takes several weeks to condition these dogs and not a few weekends. 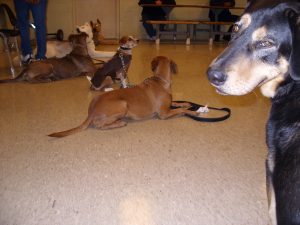 Some love the camera, some love the treats, but all will be attentive dogs once they finish the program.

As for the details of the program, the dogs are with their handlers around the clock.  They reside in the cell with them and have scheduled ‘bathroom’ breaks during the day.  Exceptions are made in cases of medical concerns for the animal such as bowel irritation or other instances. As previously discussed, the dogs learn commands and corrective behavior, have around-the-clock attention and receive grooming as necessary.  For the inmates, this is not merely a way to pass the hours.  They receive a certification for being a qualified dog handler after 4,000 hours of training which can take approximately two years.  They can also receive a grooming certification for the proper cleaning and maintenance of a dog.

Make no mistake as these are not simple pats on the back to boost morale.  While that may be accomplished in the process, the bigger picture sees someone who has acquired skills and is now marketable for hiring once they have served their time in prison.  For a country that has the highest recidivism rate in the world, this is extremely important so the individual does not somehow resort back to their ways of old.  Instead, they can be a functioning part of the workforce. 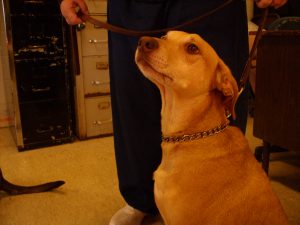 It is also worth mentioning how the program is not only therapeutic for the handlers, but for the prison as a whole.  The presence of dogs on the GCI grounds has a calming effect.  Non-handler inmates will take an interest in the animals, asking the men if they can pet their dog, while perusing any number of questions from the dog’s name to their breed and progress.  In addition, there is financial production as well.  The Love-a-Pup program has generated $11,000 in the last four years alone for the prison.  The money goes immediately back into the program, purchasing items such as cold weather gear, food and treats for the dogs, and top of the line grooming equipment such as a clipper vacuum, shark fin scissors and dental cleaning items.

These men take their job very seriously, and as Sgt. Roberts expressed to me, “All of these guys either had a dog before they got here or knew a neighbor that had a dog.”  That connection is undeniable in what I witnessed.  There is a chemistry between the imprisoned and their dogs and an emotional attachment that becomes apparent when it is time for the pair to part ways.  Each one has become a fit for their partner which has produced priceless results.  In one case, Sugar, a deaf dog found a great home caring for an autistic child.  In a separate instance, another canine graduate now pulls a handicapped child in a pool via special harness; exercise and recreation the child would have otherwise not known.  While ‘sit’, ‘stay’ and ‘speak’ are foundation commands, these are examples that go above and beyond of what is expected at the end of 12 weeks.  While every dog that enters the program may not be a service dog, one cannot deny the importance of finding a loving home for a dog that is now eager to listen and respond to their human companion. 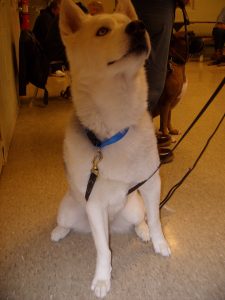 A Husky patiently awaits his next order.