Friends of Fido is a non-profit organization dedicated to caring for and rescuing dogs. They run strictly off of donations and have been partnered with Friendship APL for some time now. As far as dog pounds go, Friends of Fido works exclusively with the Mahoning County Dog Pound & Adoption Center. The charitable group’s volunteers contribute on a variety of levels when they pay their visits to the Mahoning pound by socializing with dogs, walking the dogs, and even photography of the dogs there. However, their generous involvement doesn’t stop there.

As I mentioned, Friends of Fido works closely with Friendship in getting dogs out of the Mahoning pound, which at any given time can hold 50 canines of varying sizes. While I personally have not paid a visit to that establishment, I have been to the Richland County Dog Shelter which holds the same amount if not more. These places are good in that they give the dogs a chance at adoption. These places also have a strong negative in that they are a very chaotic atmosphere for the dogs. Walking into one of these incites one dog to bark which becomes a chain reaction for the other dogs. The next thing you know it becomes a yelping symphony and a very stressful environment for the animals. Plus, when it comes to adoption at these places, it becomes a scenario of odds. Take a dog out of a crowd of 50 and put him or her in a situation of half that and their exposure to a great potential adopter improves dramatically.

That exposure comes to fruition at FAPL, and one such success story involves that of Pluto. Pluto is a mixed breed pooch discovered by a Friends of Fido volunteer who soon learned that Pluto was suffering from the early stages of heartworm. They wanted to get Pluto out of the Mahoning pound where he had already been residing for a few months. As part of the way the group operates, Friends of Fido made a donation to FAPL to assist with the treatment of the heartworm parasites, of which Pluto made a complete recovery after roughly a month. Once Pluto got the all clear from a veterinarian, he was eligible for the adoption floor at FAPL. Once that green light was given, it didn’t take long for the lovable dog with one floppy ear to get scooped up by a loving family. Right now, Pluto is living the high life with his new human companions and everyone seems enamored with the tan-coated comrade.

This may be the first time you have heard of Friends of Fido, maybe not.  However, stories like these are not rarities with them.  Like FAPL, they are often unsung heroes in the world of saving pets’ lives and getting them adopted in great homes.  This line of work isn’t a popularity contest though.  Instead, it’s often a race against time to get these loving animals connected to loving people.  In the case of Pluto and so many before him, mission accomplished. 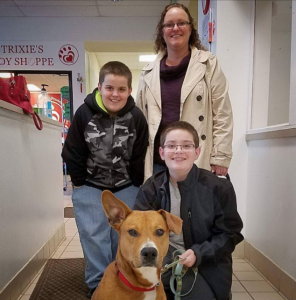