In June of 2013, a North Ridgeville woman contacted the North Ridgeville Police in hopes of finding a resolution for a feral cat and her kittens that had taken residency in her backyard. A humane officer showed up, but what took place thereafter was anything but humane. The officer proceeded to shoot the entire litter of five kittens in front of the resident and her own children. Let’s call this action what it is; simply ignorant, despicably heinous and purely unprofessional (that article can be found here). If this story were to be an answer on Jeopardy!, the category could be “Not Cop of the Year.”
*

This putrid and shallow action against the kittens, which eventually came to be known as the Woodpile 5, had inspired Elyria Mayor Holly Brinda to take some steps to prevent something like this cowboy behavior from occurring again.  With that, Mayor Brinda sought out a grant which the city ended up receiving.  From that, Fix Elyria was born in 2013.  Fix Elyria is an effort that allows the staff at Friendship APL to set cat traps and have the caged felines fixed and released, thus cutting down the feral cat population dramatically.  With a strong bit of teamwork, Operation CatSnip was enacted and the traps were set.  Organizations such as the mobile Neuter Scooter, Pet Fix (Akron) and Quick Fix (Medina) were called upon to perform the surgeries which the grant money went toward.  The combined efforts collected and fixed 150 cats in a single day. 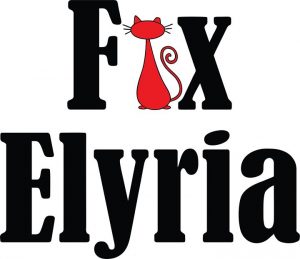 While feral cats may not initially sound like a problem, it can certainly grow out of control.  A population explosion can increase the spread of feline diseases and the cats themselves can wreak havoc on local wildlife (i.e. birds).  Thankfully, the hard work is paying off.  The number of calls from private citizens and businesses asking for assistance in remedying feral felines has decreased considerably.  Still, feral cats will be an ongoing issue so the work of the FAPL staff involved with Fix Elyria is never done.

As time has gone on since then, the grant has since run dry, though Fix Elyria is still very much alive and well.  To make this happen, FAPL continues to fund the cat-catching efforts.  On May 23, 2017, I got to see the Fix Elyria program in action.  Before the day got underway, however, I arrived at the shelter to find someone had dropped off a rabbit and a cat overnight, leaving them outside in separate cages (thank God it’s not winter).  Rabbits can be difficult to read.  The cat, unfortunately, was visibly scared to death.  Both animals are now inside the shelter confines getting food, water and any necessary medical care. 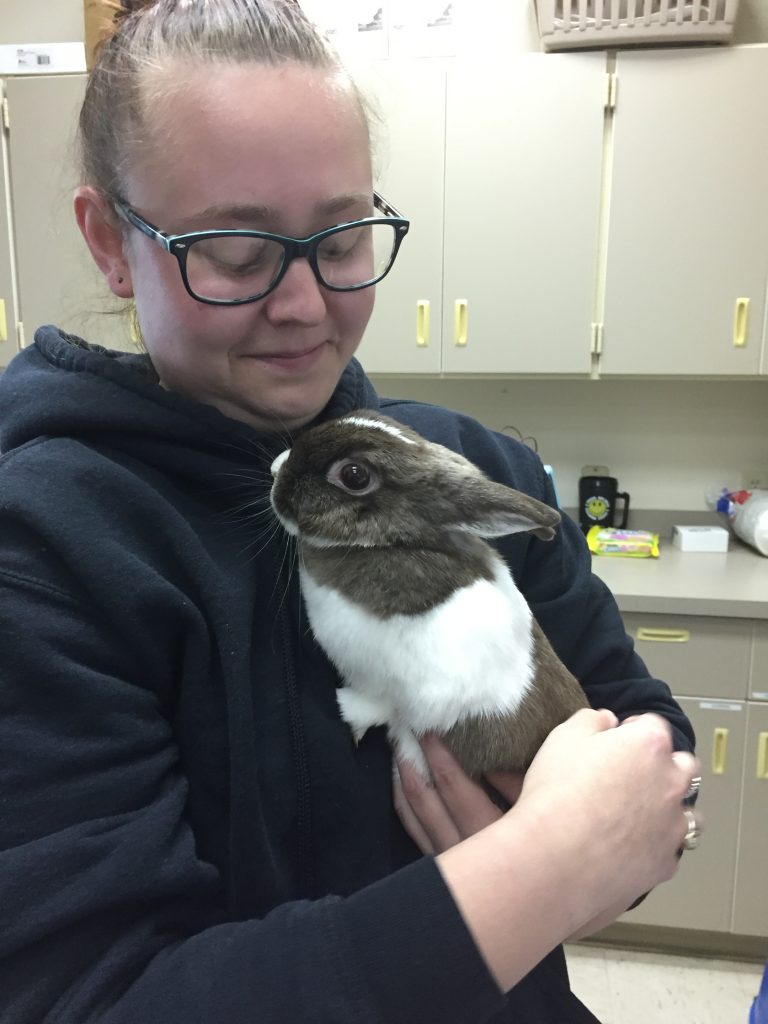 Becca consoles a rabbit left on our doorstep 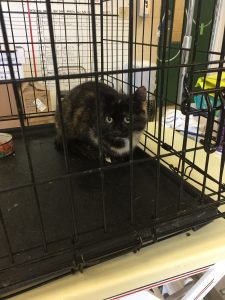 Once the friendly new lettuce-muncher and cat were secured indoors, we were on our way.  With Sue (one of FAPL’s two humane officers), and Becca commandeering the trip, we packed the van with 11 cage traps and a several individual containers of wet cat food.  Our first stop was in the historic residential district of Elyria on Washington Street.  A resident there had asked for our assistance and requested we set up a couple of the traps on her property.  We arrived under the close watch of someone peeking from behind the tree line just at the end of the resident’s backyard.  A young buck took a cautious interest in us while feeding.  Next to him, a raccoon, up well past his bedtime at 8:00 am, popped his head up to see what we were doing in his neighborhood.  Nothing to see here, fellas.  Move along…move along. 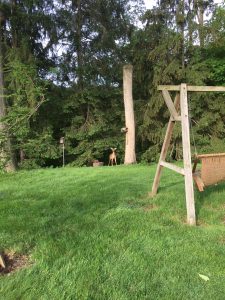 That short-antlered onlooker was no lawn ornament 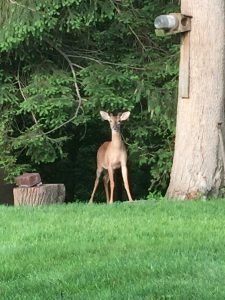 Two traps were set and then it was on to house #2.  With three traps set there, we then moved onto a few businesses and left our signature there in the form of more cage traps also complete with cat food inside.  After a short amount of time and a few miles around town, our job was done…for the morning that is.  Around 2:00 or 3:00 in the afternoon of the same day the traps are set, Sue and Becca will revisit the locations to collect the traps and send any unfixed cats we acquired to get spayed or neutered on Thursday.  By Friday they are ready to get released back into the wild. 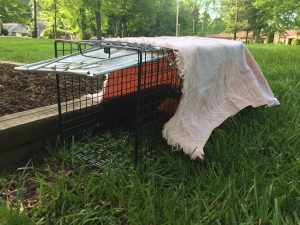 Some folks may wonder why we don’t try and adopt them out.  Well, trust us, you wouldn’t want that.  These animals are feral through and through and while they may take a liking to a human or two at some point, they have lived a life where confinement does not suit them.  Honestly, that would be a very unbefitting situation for them (and ultimately for the people housing them as well).  Dogs can be turned around from that lifestyle on the streets, cats not so much.  These are critters that are just very content to live life roaming the woods and viewing people from just out of arm’s reach. 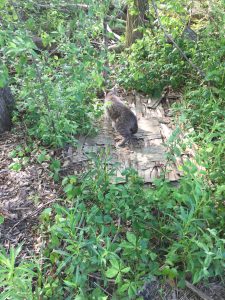 This feral kitten took an interest in the cages we left behind. Perhaps she’ll occupy one by this afternoon.

As previously mentioned, Sue and Becca will head back to the locations this afternoon to collect all the cages.  When I asked Sue what the usual results were for something like this, it turned out consistency was something out of the picture.  “Some days you get several cats, other days you may find two cats in one cage.  Then there are times you show up to find them all empty with a cat sitting on top of the cage,” she explained.  I had to laugh at the latter image, which is so typical of cat behavior.  That mocking expression of who got the victory that day is rather definitive of felines, feral or domesticated.  You gotta love ’em.

There was an intended follow-up to this article to report how many cats were trapped that day, which were two to be exact.  It’s less than we hoped for but it is progress nonetheless.  What was unexpected (and unrelated to the cat trapping) was another event concerning the same humane officer mentioned at the beginning of the article.  Without going into great detail, that officer was dismissed by the City of North Ridgeville as of May 24, 2017.