Everyone knows what a dog license is. They’re the shiny little tags that dangle from the collars of our canine companions, right?  Sure, but they are also much more than just doggie jewelry or a mere action people follow through with “just because.”  So what is the point of a dog license and just how necessary is it?

“First off, it gets your dog home if it gets lost,” says Lorain Police Officer and FAPL volunteer ‘Doc’ Rick. “Second, it’s the law and can save you from a $100 fine,” he adds. The dog license, as you can see, is not really a debatable option. If you are planning on taking on a dog, or if you already have an unlicensed one, buying a dog license is something you will want to address sooner rather than later.

Dog licenses purchased after January 31, 2017 cost $32.75. However, if you just moved into Lorain County or if your dog is under six months old, the cost is $16.75. Doc Rick also mentioned that the cost of the license goes to running county kennels such as the care and feeding of the dogs there. For an extra $5, you can get the heart-shaped license which goes toward medical care for the kennel dogs.  Also, keep in mind the license needs to be renewed on an annual basis.

It’s important to remember that a dog license is much more than a piece of metal. It’s the law and that tag is vital for getting a lost dog back home. For those that may think either or both of those prices are somewhat high, in all seriousness it is best to really consider the animal companion itself you are taking on. There will be plenty more expenses where that came from. The license is only the beginning of the care and financial responsibility that is required.

*Licenses can be acquired from Friendship APL* 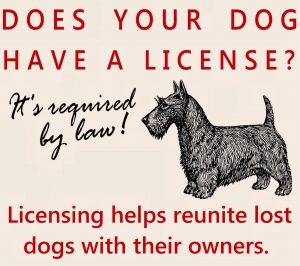