Adding a New Dog to your Pack

Are you considering adding a dog to your pack? Becoming a multi-dog household can be a very enriching experience for both you and the dogs. However, not all dogs want to share their family or space with other dogs and that’s okay. Additionally, just like people would rather avoid some other humans, dogs feel that way about some other dogs. It’s a matter of finding the right match and introducing the new dog to the pack slowly. While this may take some extra effort and steps, it is necessary if you want to ensure the easiest transition. Making sure you take the time and necessary steps to introduce a new dog into your home may help prevent any fear-based or aggressive reactions from occuring. Hopefully, some of the information in this article will be helpful in integrating your new canine into the family.

Where to Start Introduction:

First impressions can make or break the desired canine ‘friendship’.  Make sure to have the 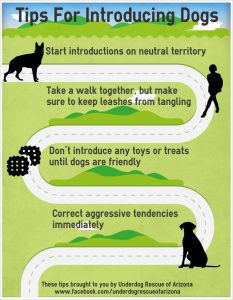 dogs meet for the first time on neutral territory. One way to introduce dogs on a neutral territory is to casually meet up for a walk together or at a park-like secured area – NOT A DOG  PARK. When introducing one of the dogs at the shelter to a resident dog in the home, we allow the dogs to meet on leash first and then walk them together to a fenced in yard. Having a friend or other family member walking the new dog and a favored family member(s) walking the resident dog(s) is a good idea as well. The trick is to allow the dogs to meet and acknowledge one another without throwing them into a home with one another and expecting the best.

What to Watch For:

Knowing what appropriate and inappropriate dog body languages are is important when introducing two dogs to one another. Behaviors that people tend to associate as positive, are not always the case and vice versa. So what body language should you look for?

The above behaviors are just some common ones to keep an eye out for. Loose body movements, relaxed open mouths, play bows/gestures, tail wagging etc. are all positive body languages dogs can be exhibiting during a meet. Stiff, slow body movements, hair standing up, tense mouth, baring teeth, clenched or chattering jaw/teeth, growls and prolonged staring are all body languages that should urge you to proceed with caution during the introduction or stop the introduction altogether. It is also important that you are not rushing and interpreting the body language wrong. Things like wagging tails, vocalness, hair standing up can all be both good and bad body languages, they are not just simply one or the other.

As dog owners, we tend to have an attachment to our animals and have an urge to protect them, especially when introducing them to an unknown dog. We, as people, feel we know our dog best. What you may not realize is that in feeling this way, you may be projecting anxiety and fear onto your dog during a meet and greet. An example of this is owners holding onto their dogs leash extremely tight and pulling the dog back from going up to the dog they are meeting. Your dog is typically going to sense the tension you are projecting and can cause your dog to react negatively. Making sure you go into a meet and greet confidently, holding your dog’s leash with a lot less tension and keeping the leash loose are important tips for a successful dog to dog introduction.

VOCALNESS is OKAY! Another tip, and something I cannot stress enough is to allow both dogs to communicate with each other. Some dogs are vocal, some are not. Some dogs get excited to meet other dogs and can show this excitement by being vocal. It is okay for your dog or the other dog to be vocal when first meeting one another. Vocalness does not always mean aggression. Unlike people when they first meet, dogs are unable to talk and say words. When first meeting, people generally say hello, or are able to express when they are uncomfortable. When  a dog is meeting another dog and they are vocal, they are doing just what us people would do when first meeting someone, expressing how they feel! An example of this is an overly excited male dog, barking to express his interest in meeting another dog coming toward him. If the other dog is uncomfortable with how overly excited the male dog is coming across, you might hear a “correction bark”. This is simply the dog’s way of communicating that it is uncomfortable and that the male dog needs to back off. That interaction is okay, and as owners, it is necessary for you to let this take place. As long as the dogs respect the corrections each other is giving, the introduction between those dogs can continue.

Once the initial introduction has taken place on neutral territory and all seems to be going well, you can take the steps to introduce both dogs to each other in the home. Remember, this is your resident dog’s territory and you are expecting he/she to accept a new dog into their space. This introduction needs to be done slowly. Just because both dogs got along on neutral territory does not mean they are instantly going to get along in an established territory such as a home. A good tip is to introduce both dogs as described above, in the backyard. This is a good step to get the dogs comfortable with one another before bringing them inside. Before bringing the new dog home, establish a separate area for the new dog. Ideally, this would be a gated area but can also be a crate. This area should be for the new dog, if both dogs become overwhelmed during their introduction inside the home. It is a space for the new dog to have as theirs and so your resident dog does not feel threatened. Bring the new dog into the house alone but still leashed. Let the dog sniff around the house, find the food and water, etc. Show them their safe space (crate or room). Just like humans typically use their bedrooms to ‘escape’, domestic animals need this type of space too. Before bringing the resident dog(s) in, remove any food bowls, beds and high value items from the floor and put the new dog in the confined area. Let the resident dog in. If there are multiple resident dogs, let only one in at a time for the initial inside the home introduction. Allow the dogs to meet through the gate or crate. Let them spend time ‘talking’ through the gaps. Do this for each resident dog being introduced. If growling occurs, do not correct the growling – this is how dogs communicate. (However, do not reward the growling either by trying to comfort the dog). Remove the resident dog from the area. If the resident dog was the offender, tire them out and try later. If the new dog was the offender, allow the new dog more time to decompress. They could be exhausted, overwhelmed, scared, etc. Let them feel safe. This could take a few days. Do not rush the introduction. It might be easier to create a visual barrier for a while so the dogs can smell each other but not see each other.

Once all are introduced, leave the new dog in its separate area and let the resident dog(s) in just like normal. Go about your normal routine incorporating separate time for the new dog also.  When it 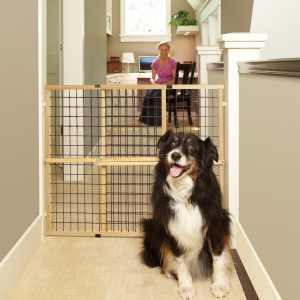 comes time to feed, feed the new dog separately. This is so that the resident dog(s) do not feel their food source is being threatened and the new dog doesn’t feel like they have to compete for food. You will have to learn how the new dog indicates he needs to use the bathroom, so for the first few days, treat them as though you are house training them.

If still going well, leash both dogs and bring the new dog into the resident dogs’ area. If all is still looking good, drop the resident dog’s leash (if multiple, do this step one dog at a time). LEaving the leashes on the dogs will give you as the owner more control of the situation. If the introduction were to go wrong, it gives you something to grab ahold of (the leash) instead of getting caught between two dogs who are fighting. As long as things are continuing to go well, drop the new dog’s leash and monitor the interactions. Dogs will indicate their displeasure with other dogs with body language indicated above.

Introduction periods between dogs take a variable amount of time. No two dogs are the same and the introduction process may have to start over multiple times before the dogs get comfortable with one another. Sometimes the integration process goes smoothly. It all

depends. Do not punish the behaviors but do not reward them either. Give this process at least 15 days before deciding the dogs will not integrate. Even if all has been sunshine and roses, you still need to monitor their interactions and they should not be left alone together in the house for extended periods. You can crate or gate the new dog for a while until you’re comfortable with their interactions. It would be best to start with short absences to see how things go if you leave all dogs free in the home.